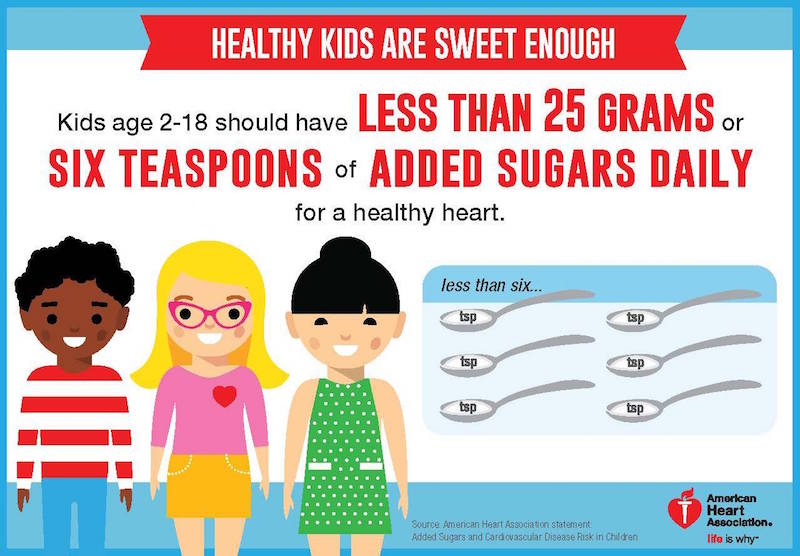 Leading US heart doctors say children and teenagers should consume no more than 6 teaspoons (25 grams) of added sugars a day.

Children and teenagers should consume no more than 6 teaspoons (25 grams) of added sugars a day, according to a new scientific statement from the American Heart Association (AHA).

Writing in the scientific journal Circulation, the doctors say that too much added sugar for young children and adolescents leads to health concerns.

These include an increased risk of cardiovascular disease, hypertension, obesity, and insulin resistance – which can lead to type 2 diabetes.

"There has been a lack of clarity and consensus regarding how much sugar is considered safe for children, so sugars remain a commonly added ingredient in foods and drinks, and overall consumption by children remains high.” said lead author Miriam Vos, MD, of the Emory University School of Medicine in Atlanta.

“The typical American consumes about triple the recommended amount of added sugars.”

After examining the scientific literature, the AHA now recommends that children between the ages of 2 and 18 years should consume no more than 25 g, or about 100 calories (approximately 6 tsp.) of added sugars each day.

For children under the age of 2 years, all added sugars should be avoided.

That’s partly to avoid damage to their heart as they grow, but also because we establish our taste preferences very early in life. Avoiding added sugar now could help to avoid a lifetime of ‘sweet tooth’ behaviour in your child.

A high level of sugar intake is something our ancestors never would have had.

"Most people across the world and throughout time ate sugar as an occasional treat, not a major component of the diet.” explains Dr David Ludwig MD, PhD, director of the new balance foundation obesity prevention center at Boston Children's Hospital.

“[But] with a simultaneous focus on welcoming back nutritious high fat foods (like nuts, full fat dairy, olive oil and dark chocolate), the shift to a diet low in sugar and other processed carbohydrates is entirely feasible and will likely produce major reductions in rates of obesity, diabetes and heart disease.”

To help parents follow the new recommendations, US food manufacturers will be required to list the amount of added sugars on the nutritional facts panel from July 2018 onwards.

"Until then, the best way to avoid added sugars in your child's diet is to serve mostly foods that are high in nutrition, such as fruits, vegetables, whole grains, low-fat dairy products, lean meat, poultry and fish, and to limit food with little nutritional value," Vos said.

*The statement was developed by several AHA councils, including the Nutrition Committee of the Council on Lifestyle and Cardiometabolic Health and the Council on Cardiovascular Disease in the Young